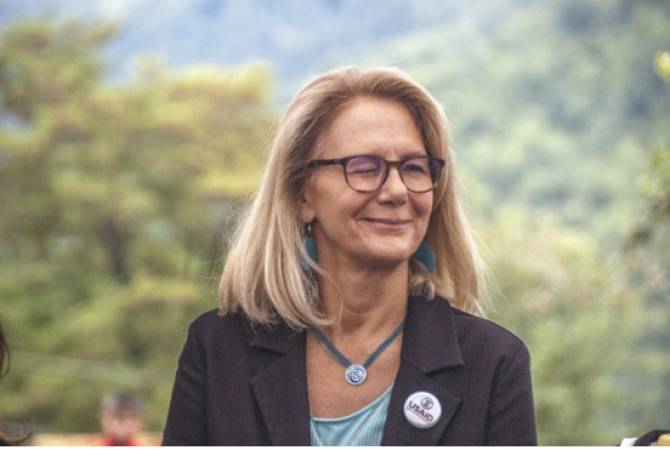 
YEREVAN, MAY 6, ARMENPRESS. Armenia has become a beacon of hope for democracy in Europe and Eurasia. Two years ago, the Armenian people took to the streets to demand a change of leadership — hungry to usher in democratic reforms and replace the kleptocratic practices that had held their country back for a generation. For 40 days, hundreds of thousands of Armenians conducted peaceful, organized protests throughout the country. In May 2018, this”Velvet Revolution" brought to power a new reform-minded government.

USAID has seized this window of opportunity to support the vision of those demanding change by aiding the government and Armenian society in developing and implementing an ambitious reform agenda.

A heavy lift for a newly-formed government, USAID experts worked closely with Armenia’s Central Elections Commission to train 20,000 poll workers, educate voters, combat disinformation, and facilitate the first national election debate. As a result, just seven months after the new government was installed, they successfully conducted parliamentary elections that were widely deemed by international and domestic observer groups to be free and fair — a first in Armenia’s 28-year post-Soviet history. The elections strengthened the trust between the government and its people, a fundamental principle of democracy, upon which further reforms will be based.

To ensure that future elections will be free and fair, USAID is supporting Armenia’s efforts to reform its electoral system — helping to amend its electoral code and strengthen its electoral institutions. Since 76 percent of the newly elected parliamentarians are serving for the first time, USAID is helping them build the skills they need to represent their constituents through hands-on training, including activities tailored to support female parliamentarians and a new internship program.

The Armenian government has taken a deliberative, strategic approach to implementing reforms, and has made significant progress. It has developed a 30-year Transformation Strategy, which focuses on anti-corruption measures and judicial reform, while seeking to set the foundations for an “economic revolution.” USAID support will help ensure that these reforms improve the quality of life for ordinary Armenians.  Over the past year, USAID has worked hand in hand with the government in developing strategies to expand sectors of Armenia’s economy with high-growth potential, including tourism, high-tech and agriculture. These efforts will be bolstered by investments to develop renewable energy sources, fostering energy independence and fueling Armenia’s economy.

For the Armenian government to make good on its commitment to a new chapter in Armenia’s democracy, however, policy reforms alone are not enough. Eradicating corruption is also among the government’s highest priorities. This year, Armenia received its highest score ever in Transparency International’s Annual Corruption Perception Index, the fourth-highest score of 19 countries in Europe and Eurasia. Armenia registered the second highest gains globally in V-Dem’s liberal democracy index, a metric used by USAID to measure a country’s Commitment to its development in the Journey to Self-Reliance.

USAID has been quick to support this progress, and to leverage Armenia’s expanding political will into an opportunity to achieve real impact in rooting out corruption. The new Corruption Prevention Commission (CPC), for example, is charged with combating corrupt practices and building integrity throughout the public sector. USAID will provide expertise to inform the CPC’s organizational and management structure; support the design and adoption of a new methodology to prevent corruption in government ministries; establish integrity checks of nominees for public office; and foster the development of an electronic open data system to publish, analyze, and enforce public officials’ declaration of assets. The intended overall impact of the CPC is to help rebuild trust between Armenian citizens and their government.

Across Armenia, USAID has also doubled down on efforts to empower citizens to remain engaged in the civic and political future of their communities. In November, 2019, USAID launched the “Let’s Do Something” campaign to sustain the momentum of citizen activism sparked by the Velvet Revolution by engaging citizens across Armenia’s 10 regions in community service projects. USAID also supports efforts to enhance the Armenian government’s ability to communicate progress on reforms to citizens — reinforcing new norms of more citizen-responsive and accountable governance. And since March 2020, USAID has provided support to the Government of Armenia to develop campaigns to share timely, critical information regarding COVID-19, which has further strengthened trust between the government and its citizens.

Photo Caption: USAID/OTI's Armenia Support Initiative's "Let's Do Something" campaign supported the Armenian city of Gyumri to host a holiday market in December 2019. Residents and city leadership supported the campaign, which is working to sustain the momentum of citizen engagement in Armenia.

Looking toward the future, engaging Armenia’s youth is also a top USAID priority. Armenia’s young people played a pivotal role in the Velvet Revolution, and their continued engagement in political and community life at the local and national level will help sustain political will for further reform. USAID’s Schools of Local Democracy provide an online learning platform to foster youth engagement. USAID also engages youth in citizen journalist activities to encourage their participation in responsible management of water in their communities. USAID Anti-Corruption Schools build young people’s awareness of corruption and involve them in anti-corruption efforts, with the goal of building a new generation of Armenians who will not tolerate corruption.

While Armenians have demonstrated a strong commitment to democratic reforms, they recognize that significant challenges remain for building sustainable democratic institutions.  USAID will continue to support Armenia as it works to build and foster the democratic future its people want and deserve.

Materials in the OPINIONS section express exclusively the author’s opinion and may not coincide with the viewpoint of the editorial.