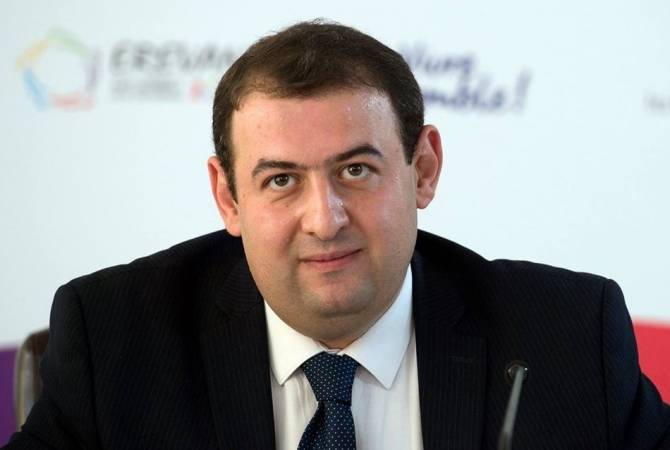 
YEREVAN, APRIL 24, ARMENPRESS. The TPS - Israel's News Agency has published the article of the Director of ARMENPRESS news agency Aram Ananyan. The article runs as follows,

For these women the cynical question posed by Hitler “Who remembers the annihilation of Armenians” does not even exist. These words are engraved on a terrifying plaque placed in The United States Holocaust Memorial Museum, which serves as a reminder that silence, oblivion and denial create ominous opportunities for the repetition of heinous crimes against humanity.

On April 24, for decades the Armenian people in all corners of the world have been paying tribute to the memory of 1,5 million Armenians, who became victims of the inhumane crime orchestrated by the Turkish state. We remembered them even in those difficult times, when due to geopolitical realities, there was an attempt to prohibit remembrance. We remember them now, when humanity is focused on the pandemic the world has to face with. We will remember them tomorrow. We’ll remember them, because we are convinced that forgetting can again pave the way for new crimes nurtured by xenophobia, misanthropy and hatred in any part of the world.

We don’t stay silent, although many people understand our pain even without words. We don’t keep silent, because silence is dangerous; friends of justice also don’t keep silent, because they understand that silence is way more dangerous than any political outcome; they don’t stay silent, as silence creates room for denial and illusion of impunity.

Elie Wiesel, Nobel Peace Prize laureate, Holocaust survivor and staunch advocate of the Armenian Genocide recognition, once famously said “to forget would be not only dangerous but offensive; to forget the dead would be akin to killing them a second time”.

Unfortunately, the forms of denial are also becoming more sophisticated nowadays. Turkish denialism is now disguised by the fusion of half-truth and blatant lies, which ends up in justifications lacking substance and attempts of shifting the blame from the executioner on the victim. This road leads to a deadlock, the way out of which will cost a deep crisis of identity.

One of the most efficient ways of swiftly overcoming that deadlock and eliminating the consequences of genocide is the continuity of international recognition of the Armenian Genocide, particularly by those nations, who had similar historical destiny, who know what kind of horrible crimes can be born out of blind hatred. The Armenian Genocide has been officially recognized and condemned by over 30 countries, including the United States of America, Russia, France, Germany, etc… It’s time to translate individual awareness into distinct decisions. This is a pivotal element of united voice saying “never again” to the crime of genocide.

Today, millions of people, a number of nations and structures will pay tribute to the memory of the Armenian Genocide victims. The impertinent question asking “Who today remembers the annihilation of Armenians?” must be closed once forever with a single response – “all of us”.

There are only three eyewitnesses of the Armenian Genocide living in Armenia today, but there are millions of survivors. We all, Armenians all across the world, carry the pain, the sufferings and horrors of our ancestors in our hearts and souls not only on April 24, but every moment, eternally. The Eternal Flame is burning not only on the hilltop at Tsitsernakaberd, but in the hearts of us all. We remember, we commemorate, we pray for the souls of the victims, and we fight for rightful and righteous recognition’'.