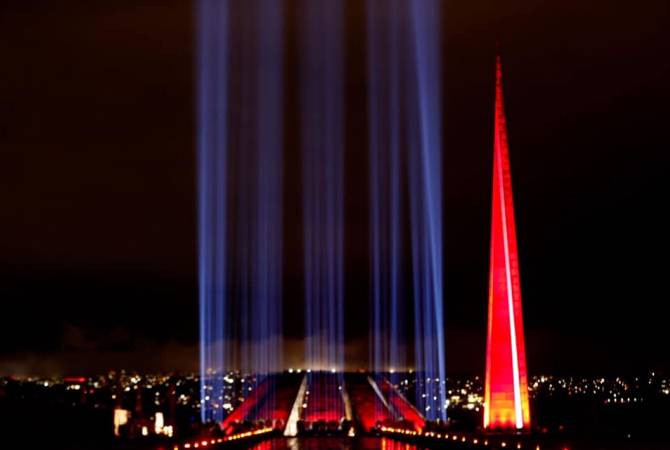 
YEREVAN, APRIL 24, ARMENPRESS. In 1915, the crime perpetrated by the Ottoman Empire against the Armenians was the first genocide of 20th century. The Armenians worldwide commemorate 105th anniversary of the Armenian Genocide.

Due to the current novel coronavirus pandemic, today, on April 24, the Tsitsernakaberd Armenian Genocide Memorial in Yerevan is closed for all visitors. The united presence of Armenians around the Eternal Flame this year will be ensured in another way: citizens from Armenia and Artsakh can send sms messages to 1915 number and to +37433191500 number those who live abroad, mentioning their names. The names of the citizens will be screened on the walls of the Memorial.

The extermination of Armenians in the Ottoman Empire during the World War I is called the Armenian Genocide. Those massacres were perpetrated by the government of Young Turks in various regions of the Ottoman Empire. The first international response to the violence resulted in a joint statement by France, Russia and the Great Britain in May 24 1915, where the Turkish atrocities against the Armenians were defined as “a crime against humanity and civilization”. According to them, Turkish government was responsible for the implementation of the crime.

When WWI erupted, the government of the Young Turks adopted the policy of Pan-Turkism, hoping to save the remains of the weakened Ottoman Empire. The plan was to create an enormous Ottoman Empire that would spread to China, include all the Turkish speaking nations of the Caucasus and Middle Asia, intending also to turkify all the ethnic minorities of the empire. The Armenian population became the main obstacle standing in the way of the realization of this policy. The Young Turks used WWI as a suitable opportunity for the implementation of the Armenian genocide, although it was planned in 1911-1912.

There were an estimated two million Armenians living in the Ottoman Empire before the WWI. Approximately one and a half million Armenians were killed from 1915-1923. The remaining part was either islamized or exiled, or found shelters in different parts of the world.

The first phase of the Armenian Genocide was the extermination of the Armenian population started on April 24, 1915 with the arrest of several hundred Armenian intellectuals and representatives of national elite (mainly in the capital of the Ottoman Empire, Constantinople) and their subsequent elimination. Hereinafter, Armenians worldwide started to commemorate the Armenian genocide on April 24.

The last phase is the universal and absolute denial of the Turkish government of the mass deportations and genocide carried out against Armenians in their homeland. Despite the ongoing process of international condemnation of the Armenian Genocide, Turkey fights against recognition by all means, including distortion of history, means of propaganda, lobbying activities and other measures.

On December 9, 1948 the United Nations adopted the Convention on the Prevention and Punishment of the Crime of Genocide, according to which, genocide is defined as an international crime and the signing states are obliged to prevent, as well as punish the perpetrators of the genocide.

The fact of the Armenian Genocide by the Ottoman government has been documented, recognized, and affirmed in the form of media and eyewitness reports, laws, resolutions, and statements by many states and international organizations. The complete catalogue of all documents categorizing the 1915-23 widespread massacre of the Armenian population in Ottoman Empire as a premeditated and thoroughly executed act of Genocide, is extensive.

Below is a brief list presented by the foreign ministry of Armenia of those states and organizations which have acknowledged the Armenian Genocide.