Imagine, There’s No Newsroom - From Novel Coronavirus to Novel Uncertainties 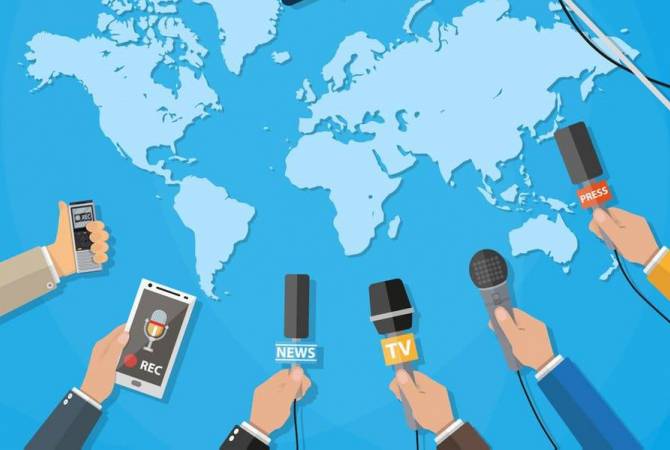 
YEREVAN, APRIL 8, ARMENPRESS. If the news media, internet and telecommunications were not to exist, it could’ve seemed that the post-industrial mankind has returned to the deep Middle Ages. More precisely, the part of the Middle Ages when a man’s movement is limited to their settlement (in the case of many countries – their apartment) territory. Few months ago, no one could even imagine in their most terrifying nightmare that the present-day “social distancing” term would describe in real life the disruption of usual human relationships.

The novel coronavirus pandemic proved to be a unique stress-test not only for countries, healthcare systems and economies, but also the press. We have found ourselves in an era of new uncertainties, and the quest for finding a solution to this equation full of unknowns is becoming harder day by day.

Even the most promoted futuristic analyses and studies in the world require revision. The coronavirus pandemic vanquished the unique mental oblivion that even during existing challenges it is possible to make projections about the future, to some extent.

Certainly, medical science will eventually discover effective measures for combating the COVID-19. Figuratively speaking, the coronavirus vaccine will be discovered sooner than we think, but later than we all want it.

Now is the time to learn lessons, rather to teach them or make recaps. In terms of the news media’s future, however, it is possible to make some preliminary observations for the post-pandemic period. Sometime later the consequences of COVID-19 will impact the daily activities of the press, and the scope of impact will include both content, production and consumption types, as well as business models and human resources management. Most serious challenges may occur for a number of branches of the news media industry, whereas others (for example radio and TV) can find themselves in a second Golden Age. Today, no one has ready formulas and the presented theses are an invitation to start a discussion on the future.

No news is good news

Today the news media is flooded with information about the coronavirus pandemic. The uncontrollable consumption of these news is reaching volumes that threaten to weaken the mental resistance of man. This is why WHO Director General Dr. Tedros Adhanom Ghebreyesus called on the global population to read the news maximum twice a day. In fact, “No News Is Good News” is perhaps the best applicable quote for the coronavirus pandemic.

However, this isn’t the only good news for the media. The media outlets have produced news both during world wars and during no less serious crises. Journalists once again proved they are ready for changes, that working and reporting during emergencies is a usual working rhythm. And now, numerous professionals are engaged in telling stories and covering in both in the frontlines and from their home offices the pandemic that is challenging the world.  It was the news media itself that turned out to be the most-prepared for switching to telework in numerous countries. In this difficult situation, many of our colleagues showed simple solutions reaching the level of genius in tactically and rapidly orientating. If in the past telework was considered a freelancer’s monopoly, now during pandemic conditions it is becoming a usual norm of life. The abovementioned already applies not only to online media outlets who already had certain telework experience, but also the other branches of traditional press – printed to broadcast.

This transformation is the consequence of rapid technological progress on one hand, and restrictions on free movement and social interactions on the other. Today monopolies are absent for the creation of news content, and with the help of new smartphones it is possible to create the kind of high-quality audio-visual content that is even comparable to the production of professional equipment of a few years earlier. Crises conditions are breaking taboos. And the traditional news media are no longer constrained in not deploying the type of content-creating methods which they would resort to only in the event of extreme necessity in the past (tele-conferences, skype calls etc.), just like G7 leaders don’t have to gather for a summit if it can be done in a tele-conference format. The pandemic became the catalyst of development of previously projected trends. But won’t this predicted inertia be slowed down from the imminent economic uncertainties?

The projections about the future of global economy and the potential drop of economic activity may inflict a painful blow to the economic opportunities and financial sustainability of media outlets. In short-term perspective, this all might as well not become a serious challenge, but it is crystal clear that the news media will also suffer serious economic losses in conditions of worsening public and economic fears

It is still unclear what will happen to the traditional sources of income of media outlets, it is unclear how the commercial advertisement market’s conjuncture will change. These transformations will inflict the most painful blow to the “Golden Mean”, because global major players have far greater resources for resisting potential shocks, while small players – bloggers, vloggers and podcasters are working with already limited resources.

A part of media outlets will have to seek new income sources in times of narrowing opportunities.

At the same time, the extending practice of teleworking may put into question the necessity of maintaining offices and making the subsequent spending. Is the big newsroom disappearing by ceding its spot to a minimum-loaded office which is possible to be maintained with limited spending? And are media-managers nearing the day when they will have to make a difficult choice in human resource management for saving the media outlets with the same method that overloaded Italian hospitals are forced to make in order to save lives?

Anyhow, the liberalization of technical requirements for content will lead to a situation when media outlets will need professional, unique “universal soldiers” capable of creating multifarious content. And if these projections become reality, then Artificial Intelligence tools and mobile technologies will get greater applications not only in media consumption but also content production.

Quoting Márquez: “Chronicle of a Death Foretold” or “Love in the Time of Cholera”

I am among the narrowing group of people for whom the printed newspapers and Gabriel García Márquez’s novels are the “first loves” in journalism and literature respectively.

Most probably it was because of subliminal irony that these two titles of Márquez’s novels became the headlines of this paragraph.

Predictions about an imminent death of printed press are being heard for a long time. They are heard ominously. Circulation of printed press are declining globally, and news about newspapers or magazines shutting down or switching to online-only are so frequent in the newsline that any new birth of a printed news outlet is almost a sensation. Skippers of the printed press, however, are fiercely resisting, switching to electronic and online subscription sales, however none of them is able to break the backbone of the negative projections.

And although newspapers are still championing in being the most reputed branch of news media, the novel coronavirus pandemic is inflicting the hardest blows to the printed press, the production of which also involves other branches such as printing industry, distribution and subscription services.

Most probably the quarantine measures will further drop the already low sales of printed press. The fact that paper can be fomite for the virus will also impact this trend.

What changes may happen in the consumer behavior of people is also unknown, and most likely the printed press is destined to resist the hardest blow of the “corona-crisis.”

Any challenge is first and foremost also an opportunity. In the post-pandemic “New World”, the challenge of strengthening economic capacity will be the hardest one. Most likely, this circumstance will force media outlets to pay greater attention to the kind of spheres of activities where the solvent demand will shift to. And it’s not about the production of toilet paper at all….

According to a projection of the World Economic Forum published years earlier, simultaneously with the growth of the middle class (which was projected to total 4,9 billion people globally in 2030) the demand for new media services was also projected to increase: in the consumer arena of educational, premium content, on-demand video content, healthcare and welfare services.

The coronavirus pandemic and the enforcement of quarantine measures in many countries automatically contributed to the justification of these projections. We assume that the media outlets will also increase contributions in these spheres. This can change the nature and content of the media outlet’s work to some extent.

Reputation: the “intangible” capital of a media

For any modern news media, reputation is not only and not as much of an intangible value as a capitalizing, and why not also a commercializing asset. And despite uncertainties, one thing is very certain: the future will not be without new universal challenges which will concern everyone, just like the danger of the pandemic. Given the world’s connectivity and the volume of globalization, the new challenges can be no less difficult.

As much as anti-globalist calls may be voiced in the current short-term period, the world in itself will not become less global neither in terms of economic ties, nor human contacts and information flows, and the technological developments will only deepen these trends.

Just like in present days, in the future the reputation of information disseminators will be highlighted in overcoming crises. In strengthening this “intangible” capital, all players of public life have actions to take – first of all the media outlets themselves, especially now when new, more difficult, actual and tangible problems are being added to the earlier ones (fake news, the march of the social media, journalistic ethical issues of the digital world and others).

A lot may change in the world after the pandemic, but the press, internet and communication will remain equally important. If they were not to exist, we would appear in the deep Middle Ages, wouldn’t we?