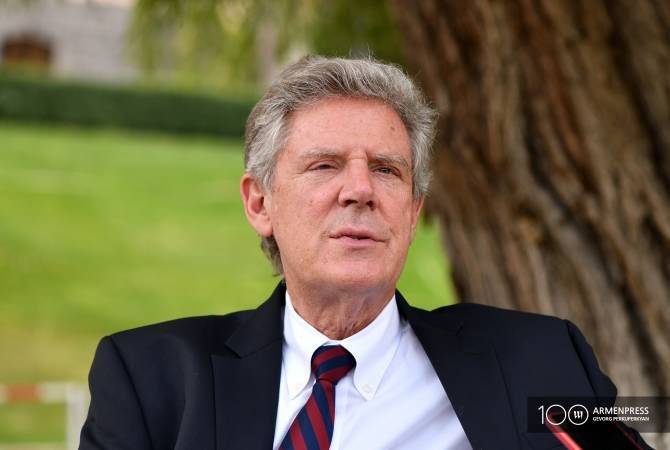 “The United States should immediately suspend military aid to Azerbaijan until its government ceases its attacks against Armenia and Artsakh, agrees to the peaceful resolution of regional conflicts, and proves it has halted all human rights abuses,” stated Chairman Pallone in his testimony to the House Armed Services Committee, as they prepare the Fiscal Year 2021 National Defense Authorization Act (NDAA). “We must also strive to send a more supportive signal to our regional partners currently undergoing positive, democratic transitions like Armenia by increasing security assistance and bolstering strategic cooperation between our countries,” stated Rep. Pallone.

“The ANCA would like to thank Chairman Pallone for his continued leadership in ending U.S. military assistance to Azerbaijan that has only empowered and emboldened Azerbaijan to escalate its aggression against Armenia and Artsakh,” said ANCA Executive Director Aram Hamparian. “His testimony, only hours after Azerbaijan’s latest attacks on Armenia’s Tavush region, underscores that America and the international community will not tolerate Azerbaijan recklessly risking a regional war amid a global pandemic.

March 30th cross-border sniper fire by Azerbaijan injured two Armenian servicemen and hospitalized a child who was shot in the chest while playing on his apartment balcony. Hamparian issued a statement yesterday noting that the attacks confirm two realities: “1) The unwillingness of the OSCE to confront countless acts of obvious Azerbaijani aggression against both Armenia and Artsakh – in favor of the false-parity of generically calling on all parties to refrain from violence – has emboldened Baku to the point that it is today willing to risk a regional war during a global pandemic; 2) Armenians will never accept a Madrid-style deal that requires Artsakh to cede vast territory, strategic depth, sovereignty, and security upfront in return for vague, reversible paper promises from Azerbaijan that it will agree – at some undetermined point in the future – to a undefined process regarding Artsakh’s status.”

In his testimony, Rep. Pallone expressed concern that ongoing U.S. military assistance to Azerbaijan is emboldening cross-border attacks, like the March 30th sniper fire into Armenia’s Tavush region, which wounded two Armenian servicemen and a child. “For years, the United States has invested in a negotiated peace to the conflict in the former Nagorno Karabakh, including humanitarian assistance funding for the HALO Trust’s landmine and unexploded ordnance clearance efforts in Artsakh. Unfortunately, intimidation and cross- border attacks against Armenia and Artsakh are ongoing, in part, because of continued U.S. military assistance to the Azerbaijani government,” said Pallone.

Rep. Pallone urged the House Armed Services Committee to adopt a constructive approach in ending Azerbaijan’s aggression against Artsakh and Armenia including: