Is the US decision on aiding Artsakh  final? ANCA Executive Director Aram Hamparian has the answer | ARMENPRESS Armenian News Agency

Is the US decision on aiding Artsakh  final? ANCA Executive Director Aram Hamparian has the answer 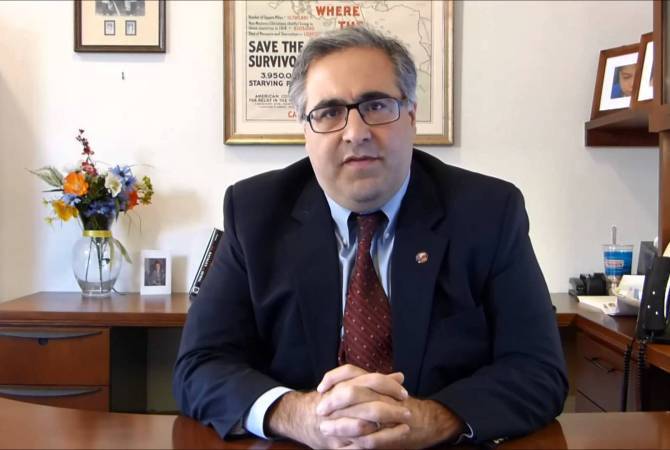 
YEREVAN, MARCH 25, ARMENPRESS. Over the past months, HALO Trust’s Nagorno-Karabakh demining program aided by the United States has been in the centre of different discussions. ANCA’s Executive Director Aram Hamparian shared his views and, finally, gave a precise answer to the commonly asked question: “Is the Artsakh decision final?”.

“It has been a 2 decades-long legacy of one administration after the other attacking this program. You know… This is a very heavy attack, I think, maybe the worst we have seen. But this is nothing new. This administration is following the tradition set by Clinton, by Bush, by Obama and now by Trump”,- mentioned Hamparyan.

Hamparyan stressed that before making any final assessments, it is necessary to take into account the processes taking place in the US, as well as the U.S. Constitutional system. Summing up the results of past processes, he recalled that back in 1997, when Brad Sherman brought an amendment to the House Foreign Affairs Committee in order to adopt legislation that would authorize US assistance to Nagorno Karabakh for the first time ever, the amendment was attacked at pretty much the same language that the State Department is attacking the program today. However, this process paved a way in the next several months for the adoption of the measure, the provision in the FY98 appropriations bill and with the support of many others that aid program was adopted as part of the fiscal year 1998 foreign bill.

“So that’s been back and forth because that in the course of 20 years and we have kept the program alive, it’s never ever been easy, it’s never been a walk, it’s never been without opposition from the executive branch. So when people talk about things like “well the Administration is really against it. Yeah, what else is new? They have been against this forever and it is unrelenting and in certain levels, it’s an inhumane call because it is a humanitarian aid program. The purpose of the program from the day one has been to provide humanitarian aid and in the early days it was material healthcare, later on, it was things like clean drinking water, today it is demining”, Hamparian said.

Speaking of the most-asked question related to the final decision, Hamparian stressed: “The final say will come in the coming weeks, within months as the fiscal year 2021 of Foreign Aid bill is drafted...Is the Artsakh decision final? The answer is no. The final decision will be the result of the interplay between the executive and the legislative branches. For our part, we are working very, very hard on this front”.

Emphasizing its importance in the peace process and US’s role in it as an honest broker, Hamparian also mentioned that this is on their top priorities list in Washington. According to him, this is an opportunity in a two-decade-long history of the program for Armenians to step up and fight harder. At the same time, he mentioned that the Members of Congress are currently busy with other issues concerning the health system, economy and American people’s health. Although he assured that both Artsakh office, Armenian Embassy to the US and ANCA are teamed up, working on this issue, they need the assistance of U.S. citizens, the Armenian community in particular. “If they [legislators] don’t hear from you, they are going to assume, you don’t care. That is how it is”,- highlighted Hamparian.

He called on the Armenian community of the US to send letters to the members of Congress by visiting ANCA.org/aid, emphasizing the importance for them to continue working for the assistance to Artsakh program”.

“The process is over when we stop to try and that is not going to happen”,- concluded the Executive Director of ANCA.