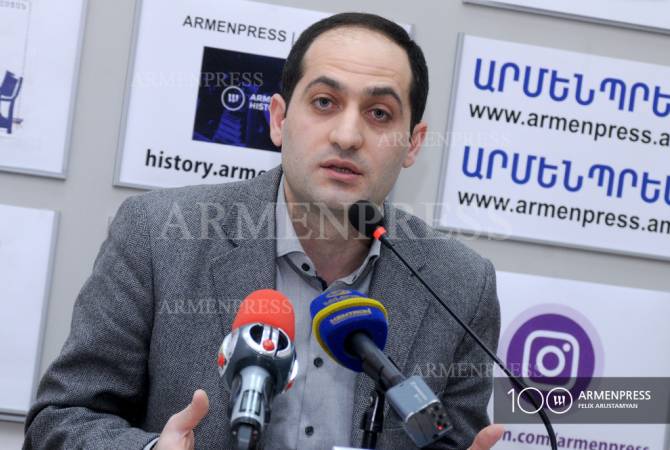 
YEREVAN, MARCH 19, ARMENPRESS. Special Aide to the Speaker of Parliament of Iran on International Affairs Hossein Amir-Abdollahian, condemning Armenia’s decision to open an Embassy in Israel, stated that it contradicts the interests of the people of Palestine. The Iranian official also noted that the opening of Armenian Embassy in Tel Aviv will negatively affect the regional security.

Expert on Iranian studies Armen Israyelyan gave an interview to Armenpress on the topic.

-What is the influence of Hossein Amir-Abdollahian on Iran’s foreign policy, and whether his position can be considered as Iran’s official position?

-Until 2016 Hossein Amir-Abdollahian was serving as Iran’s deputy foreign minister, coordinating the relations with the Arab states and Africa. He was enjoying the full support of both the Islamic Revolutionary Guards Corps (ICRC) and the conservatives and his tough positions and non-diplomatic wording sometimes resulted in tension in the relations between Iran and the Arab states of the Middle East. It’s worth noting that at that time Hossein Amir-Abdollahian was dismissed when after the signing of the nuclear deal Hassan Rouhani’s government was trying to normalize the relations with the Arab countries. And it’s not a coincidence that his dismissal was greatly approved in the Middle East.

In recent years the manifestations of dual power in Iran are more noticeable. And the statement of this official can be viewed within this logic. There are many examples when in the past one decade any member of Parliament or a law enforcement official, even Ambassador accredited in foreign countries, are making statements contradicting the official position of Iran. Of course, in such cases the Iranian foreign ministry announces that “Tehran’s position has not changed”, but this situation cannot be understood by the partner countries. And the contradictory statements coming from Tehran can affect the relations with the partner countries and also endanger Iran’s interests in the South Caucasus.

Iran is aware long ago about Armenia’s decision to open an Embassy in Israel, in this sense official Yerevan is working transparently with all its partners, and Armenia’s regional policy priorities have been clearly presented at the highest level of leadership. Hossein Amir-Abdollahian’s “surprise” over Armenia’s relations with Israel is surprising because the former deputy FM, while talking about the Armenia-Israel relations, tries to counter them against the interests of Palestine, in case when as the last meeting of the Armenian President and the President of the Palestine National Authority shows, there is no misunderstanding in the bilateral relations.

-In that case, what stands behind this statement, and why it is made now?

-Hossein Amir-Abdollahian’s statement was followed by a similar statement on Twitter by Conservative MP Ruhollah Mutafaqer Azad and manipulative assessments at expert-level in websites operating under ICRC on the Israel-Armenia relations. Political reshuffles are taking place in Iran. A new parliament has been elected where conservatives are a majority. Taking into account the “campaign” launched against FM Zarif in the past one year, it’s obvious that at the completion of Rouhani’s tenure an attempt is made to deprive the foreign ministry from the independence it gained since 2013.

Currently Iran wants to get rid of the US sanctions with the help of partner states. For that purpose Iran has applied to the member states of Non-Aligned Movement (NAM) through Azerbaijan (NAM chairing country), proposing to adopt a joint statement over the US policy. However, several countries of the Middle East rejected the proposal. Maybe, this angered the pro-ICRC circles and not receiving a foreign support they targeted the Armenia-Israel relations without understanding.

We would advise the respectful Iranian parliamentarians, before expressing an opinion on Armenia’s actions, to assess the policy of some neighbor countries of Iran while talking about the regional security and compare them with Armenia’s regional policy.