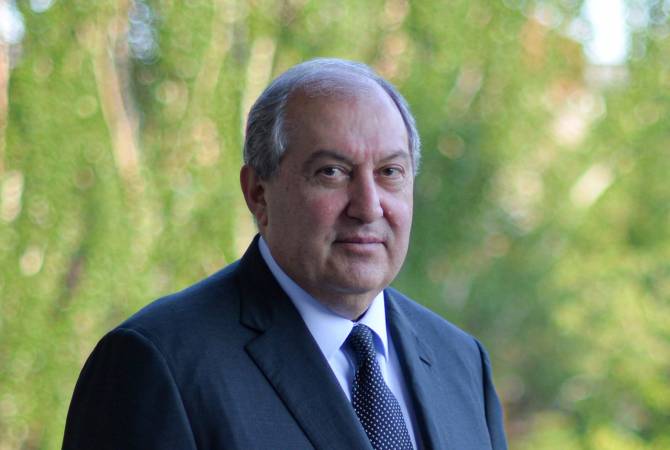 
YEREVAN, FEBRUARY 28, ARMENPRESS. President of Armenia Armen Sarkissian addressed message in the memory of the victims of the carnage organized in Soviet Azerbaijan and Day of Protection of the Rights of the Expelled Armenian Population, the Presidential Office told Armenpress.

Today is the 32nd anniversary of the tragic events in Sumgait town of Azerbaijan. In those days in February, 1988, supported by the criminal acquiescence of the authorities of Soviet Azerbaijan, local armed gangs in Sumgait executed mass violence against the Armenian population, which mounted to massacres, accompanied by torture, rape, looting, and torching of the Armenian property. As a result of the crime instigated and carried out at the state level multiple citizens of the Armenian origin were killed, many were injured, subjected to violence, and deported.

Violence and savageries against Armenians in Sumgait, and later in Baku, Kirovabad, and Maragha in their nature were reminiscent of the horrendous days of the Armenian Genocide of 1915. They also resulted in xenophobia and especially Armenophobia enthused in Azerbaijan for decades which today has become even more pronounced and have acquired state-sponsored and state-coordinated features.

Recalling the tragic events, which happened more than 32 years ago, paying tribute to our compatriots, who became victims, and proclaiming February 28 in Armenia and Artsakh the Day of Remembrance of the Victims of the Carnage Organized in Soviet Azerbaijan and Day of Protection of the Rights of the Expelled Armenian Population, we also send a message to the humankind that civilization cannot develop guided by fascism, national discrimination, and xenophobia.

Each case which goes unpunished, each distorted fact, each life taken based on hatred means a new opening and possibility for tragedy, it means complicity with those who perpetrate xenophobia, instigators and those who use it as a weapon. It also means incessant waves of hatred in the region, unhindered path to ethnic cleansing, and ultimately to the gravest crime against humanity – genocide.

The tragedy in Sumgait and Armenians affected by it were the immediate victims of homophobia and Armenophobia. Keeping the road open for the “Brown plague” today too, manifests disrespect to the memory of all those who fell victims of fascism and xenophobia.

I bow to the memory of all those who became victims of the Azerbaijani violence in Sumgait and Baku.

May they rest in peace”.