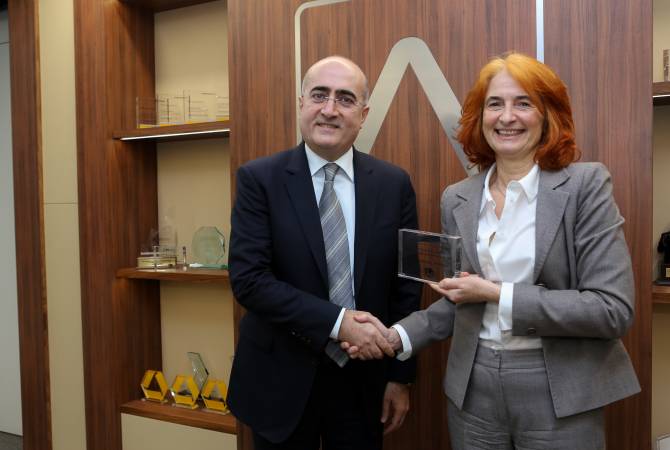 As ARMENPRESS was informed from Ameriabank, the two awards reflect Ameriabank’s success in raising short and long-term trade finance with IFC-guaranteed letters of credit under IFC’s Global Trade-Finance Program (GTFP). These funds are channeled among others into agriculture, road construction, and to enable businesses to purchase energy-efficient state-of-the-art equipment.

Georgina Baker, IFC Vice President for Europe, Central Asia, Latin America, and the Caribbean, presented the awards to Ameriabank in Yerevan. She said, “Trade finance is a key priority for IFC because of the strong impact it can have on fostering economic activity and development. With IFC-supported trade transactions, Ameriabank, our long-term partner in Armenia, has supported imports of modern and energy-efficient equipment for road construction and greenhouses, contributing to economic growth and job creation. These two well-deserved awards recognize Ameriabank’s excellence in furthering our mission in Armenia.”

The award for Best Partner Bank for Equipment Trade in Europe and Central Asia is being presented for the first time this year. It was introduced to recognize the best and most active partners in the recently launched medium-term extension of GTFP, which covers eligible trade transaction tenors of up to five years in support of imports of equipment and capital goods with the focus on climate change.

Andrew Mkrtchyan, Chairman of the Board of Directors of Ameriabank, commented, “We highly appreciate the IFC awards. It is a great honor for us to be the first recipient of a newly-established award in Europe and Central Asia. We began cooperation with IFC in trade finance in 2009 and since then have been able to substantially increase trade-finance activities in Armenia. I am sure that our joint efforts will promote development of the Armenian banking sector and the synergy will contribute to economic growth in our country.”