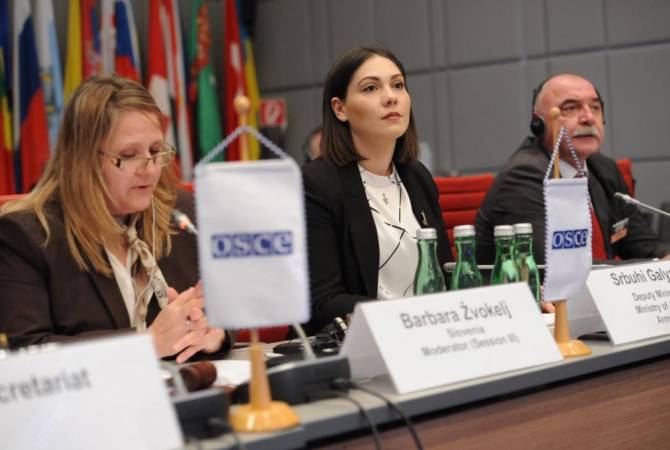 
YEREVAN, FEBRUARY 18, ARMENPRESS. Deputy Justice Minister of Armenia Srbuhi Galyan is taking part in the 28th OSCE Economic and Environmental Forum dedicated to “Promoting security, stability and economic growth in the OSCE area by preventing and combating corruption through innovation, increased transparency and digitalization” in Vienna, the ministry told Armenpress.

Before her remarks on the topic “Enhancing transparency through asset declarations”, the deputy minister thanked the OSCE for the invitation to present the Armenian experience, for the constant cooperation and the support to the Armenian government in fighting corruption.

The deputy justice minister introduced Armenia’s democratic processes of the past two years, the works to prevent and fight corruption, stating that compared to 2017, the number of criminal cases launched over corruption crimes has increased by 60% in 2018. She also presented the directions of the Anti-Corruption Strategy which was developed with the concerned sides. In addition, Srbuhi Galyan also introduced the functions of the Corruption Prevention Commission, the online platform for alarming corruption crimes, as well as a number of other initiatives.

The Economic and Environmental Forum is the main meeting-cycle within the Economic and Environmental Dimension of the OSCE. Its objectives are to identify needs and priorities, to raise awareness and to stimulate the political will of the 57 OSCE participating States  in dealing with economic, environmental and security related challenges, to share best practices, as well as to provide a platform for dialogue with representatives of International Organizations, the business and academic communities, and civil society.