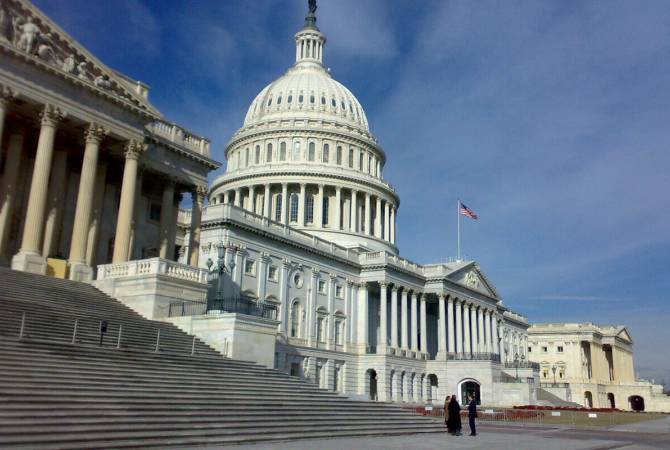 
YEREVAN, FEBRUARY 15, ARMENPRESS. Congressionals of the Armenian Caucus joined with human rights advocates, diplomats, and the Armenian American community, in a Capitol Hill remembrance of the 30th anniversary of the anti-Armenian pogroms in Baku, vowing to continue US support for the security of the Artsakh Republic. Among Members of Congress sharing their commitment to stronger U.S.-Artsakh relations were Congressional Armenian Caucus Co-Chairs Frank Pallone (D-NJ), Gus Bilirakis (R-FL) and Jackie Speier (D-CA) as well as Representatives Judy Chu (D-CA), Jim Costa (D-CA), TJ Cox (D-CA), Raja Krishnamoorthi (D-IL), Andy Levin (D-MI), and Jan Schakowsky (D-IL). The event featured keynote remarks by Anna Astvatsaturian Turcotte, an Armenian refugee from Baku who found shelter in the United States along with her family.

The Capitol Hill program was organized by the ANCA, Armenian Assembly of America, Embassy of Armenia, and the Office of the Artsakh Republic in cooperation with the Congressional Caucus on Armenian Issues.

Commemorating the anniversary of the tragic events in Baku, congressionals emphasized the crucial role of the demining program in Artsakh funded by the United States, calling on the Congress to continue the support. It is worth noting that Jackie Speier along with other congressionals, Co-chair of the Armenian Caucus, marked the anniversary of the Armenian pogroms on the floor of the U.S. The House of Representatives. She described the pogroms in Baku as “the culmination of years of atrocities by the Azeris against ethnic Armenians living in Azerbaijani communities such as Sumgait and Kirovabad ''. The Congresswoman expressed concern that despite the fact that Armenia and Artsakh accepted the Royce-Engels peace proposals [proposals to withdraw snipers, expand OSCE’s role via an OSCE investigation mechanism and deploy sensors along the line of contact and the Armenia-Azerbaijan international border] and Azerbaijan rejected them , today Artsakh may lose the assistance provided for the demining program funded by the US.

Speier also shared concerns over the massive disproportion increase in military aid to Azerbaijan from the United States. Making a powerful case of peace, freedom and security, Speier addressed the Congress to help those who stand for peace and democracy. “We must fight for the memories of those we lost for their dreams of safety and security and for the promise of a free Artsakh”,- Speier said.

Representatives Jan Schakowsky and Raja Krishnamoorthi of Illinois, Jamie Raskin of Maryland, James P. McGovern of Massachusetts joined Rep. Speier in commemorating the Baku Pogroms, as well. Rep. Schakowsky emphasized the role of education of the history of violence targeting the Armenian people and said she will continue working with her colleagues to promote legislation to help facilitate more states to follow Illinois developing Armenian Genocide education. “We must ensure that the victims of the Sumgait and Baku pogroms are never forgotten and that such hateful acts of violence never happen again. We must remain committed to achieving a lasting peace in the Caucasus, and ensure that the people of Artsakh are able to live free from Azerbaijani abuse and aggression”,- said Schakowsky.

Raja Krishnamoorthi called upon the authorities of Azerbaijan to acknowledge the Armenian pogroms and take all appropriate actions to prevent further tragedies of this nature, and take the necessary steps to begin the healing process for the families of the victims.

James P. McGovern declared that the Baku pogrom was not a spontaneous and one-time event, but the culmination sofa series of ethnic violence waged against Armenians. “No one has been held accountable for the violence and the deaths. Azerbaijan remains in turmoil because of the fanaticism and thirst to ethnically cleanse the entire region of Armenian Christians”,- said McGovern.

Rep. Raskin underlined that the violence against Armenians in Azerbaijan continued even after the international outcry, including bipartisan resolutions, statements and letters from concerned members of Congress. He highlighted that when governments put in place dehumanizing rhetoric, policies and laws, hatred, violence and suffering follow, urging his colleagues to recognize the plight which ethnic Armenians suffered 30 years ago and to stand vigilant against the use of ethnic and religious hatred to stir violence against minorities here in the United States and around the world.

The anniversary of the Armenian pogroms in Baku were also marked by Congressional Armenian Caucus founding Co-Chair Frank Pallone on January 30. The Congressman stated that Azerbaijan has taken steps to cover up these crimes against humanity and dismiss the atrocities in Sumgait and Baku. “Even more disturbing is that the perpetrators of this event and similar violent attacks have been lauded as national heroes by the Azeri government. Tragically, the Azerbaijani government’s approach toward the Armenian people has changed little since the pogroms were initiated. We still hear the same violent rhetoric and witness intimidation tactics aimed at the people of the Republic of Artsakh”,- stated Rep. Pallone in his Congressional statement.

Pallone called the United States government to recognize and denounce violent assaults against any civilians, underlining that if they allow the crimes to go unpunished and unrecognized, they will only strengthen the resolve of those seeking to perpetrate these crimes in the future.