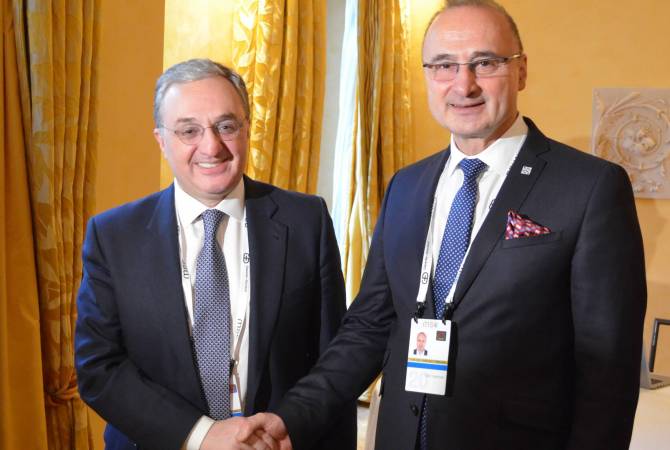 
YEREVAN, FEBRUARY 15, ARMENPRESS. On February 14, on the margins of the Munich Security Conference, Foreign Minister of Armenia Zohrab Mnatsakanyan met with Gordan Grlić Radman, Minister of Foreign and European Affairs of Croatia, the MFA told Armenpress.

Minister Mnatsakanyan congratulated Grlić Radman on the occasion of assuming the presidency of European Council, reiterating Armenia’s support to the priorities of Croatian presidency.

The sides exchanged views on a wide range of issues of the Armenian-Croatian agenda, particularly emphasizing joint efforts towards enhancement of meetings, mutual visits on different levels and political consultations.

The full use of the potential of cooperation on multilateral platforms was especially emphasized. Touching upon the EU-Armenia partnership, the sides stressed the role of the Comprehensive and Enhanced Partnership Agreement in promotion and legal regulation of relations between Armenia and the EU, as well as its member states. The interlocutors exchanged views on the preparation for the upcoming EaP summit.

In the context of promoting people-to-people contacts, Foreign Minister of Armenia highlighted the importance of launching the dialogue on visa liberalization with the EU countries.