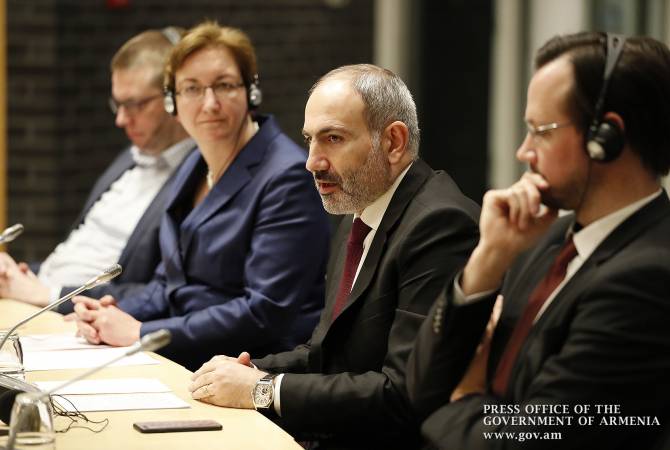 
BERLIN, FEBRUARY 13, ARMENPRESS. The OSCE Minsk Group Co-Chairmanship negotiations process for the settlement of the Karabakh conflict must be preserved, Prime Minister of Armenia Nikol Pashinyan said during a meeting with German academics and experts at the Friedrich Ebert Foundation in Berlin.

“It is an exclusive negotiations format where the cooperation of Russia, USA and France exists. It is due to this cooperation that the relative calm is being maintained in the region for more than 25 years,” Pashinyan said when asked about the OSCE Minsk Group format.

Regarding the EU’s factor, the PM noted that civil institutions can actively work with colleagues in Karabakh.

“It is strange for me that the EU, being the advocate of protection of human rights and democracy, but civil society representatives don’t have a cooperation format with representatives of the Karabakh civil society. It is said that there are problems regarding Karabakh’s status. I’m saying, let’s assume Karabakh’s status is unclear, but is there any doubt regarding the status of the people living in Karabakh? Does anyone say that the protection of human rights and development of the people living in Karabakh doesn’t fit in the context of human rights protection? I believe that EU countries can support this process,” Pashinyan said.

A representative of the Azerbaijani community of Berlin, who was present at the meeting, asked the Armenian PM when he will be able to return to his father’s home, claiming that he doesn’t have the opportunity to do so today.

“You know, there is the Shahumyan Region, where Armenians lived until 1990. Today, thousands of Shahumyan residents are unable to return to their homes because Shahumyan was subjected to ethnic cleansing. The situation that we have today, the status quo that we have, is the result of simply one thing – the Armenians of Karabakh wanted and want to defend their right to live. They didn’t try and aren’t trying to do harm to anyone, to deprive homes, they wanted to defend their right to live,” Pashinyan said.

He also addressed an observation claiming that Armenia is heading towards Europe. “Armenia isn’t heading anywhere. Armenia is where it always was. We continue being in our place,” Pashinyan said.