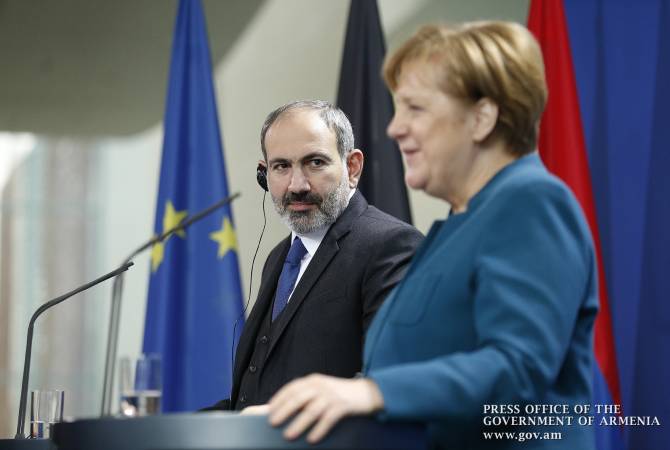 
YEREVAN, FEBRUARY 13, ARMENPRESS. Germany is one of the power bridges linking Armenia to the EU, the European civilization and culture, Prime Minister of Armenia Nikol Pashinyan announced during a joint press conference with German Chancellor Angela Merkel, the correspondent of ARMENPRESS informs from Berlin.

“Germany is Armenia’s close friend and partner and we can feel that power of friendship in terms of both emotionally and practically. Today I can record with confidence that our friendship is based on common values”, Pashinyan said, adding that it fosters cooperation in various spheres.

Pashinyan added that this is his 3rd meeting with Angela Merkel, which shows the high level of bilateral relations.

“I am glad to note that today we are also linked with mutually beneficial cooperation and practical programs. We are ready to do everything to further strengthen it”, Pashinyan said.

Nikol Pashinyan particularly emphasized the assistance of Germany to the reforms in Armenia and expressed gratitude to Germany and the EU for the moral, political, and financial support. “It is of key importance for ensuring the irreversibility of democracy in our country”, he said.

The Armenian PM informed that at the end of February Armenia expects the visit of the delegation of German businessmen, while in October “Armenia-Germany economic forum 2020” will take place.

“We are greatly interested in the entry of German companies to Armenia. I have to record with satisfaction that following our last year’s meeting we have tangible progress over almost all the agreements. We are very happy for the agreement with KfW Bank on establishing a TUMO center in Berlin. It’s a great honor for us to share our experience with a technological giant like Germany”, PM Pashinyan said.

He expressed the interest of Armenia to further popularize German language and culture in Armenia. “We hope that the Goethe Center in Yerevan opened in December 2017 will become a full-fledged institute in the near future. Summing up my speech, let me record that today the Armenian-German relations are on the highest ever level”. PM Pashinyan said.