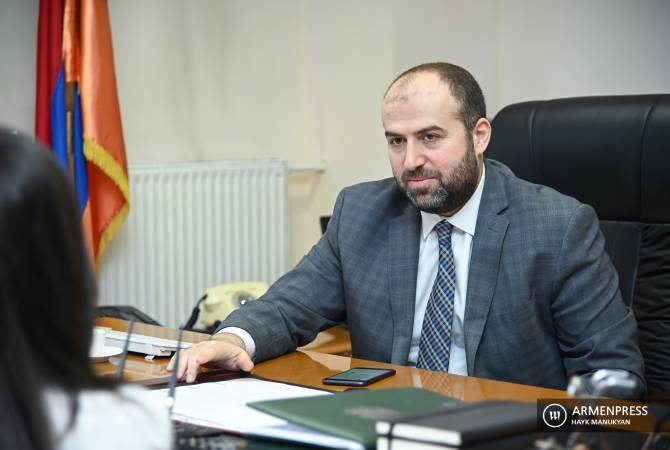 
YEREVAN, FEBRUARY 13, ARMENPRESS. Armenia was planning to implement the Global Electric Mobility program in 2019, but the project on switching the government fleet to electric vehicles has been delayed, Minister of Environment Erik Grigoryan told ARMENPRESS in an interview.

“This is a global process and not only Armenia is involved, and due to certain procedural delays of other countries the program got delayed. The Government of Armenia will switch to using electric vehicles in the nearest future. The project will be implemented through environmental grant funds provided by the Global Environment Fund. The legislation related to electric vehicles came into effect in the second quarter of 2019. Comparing the import figures of electric vehicles of the same period of 2018 we see a huge difference. In 2018 only 1 electric vehicle was imported to Armenia, while in 2019 nearly 150. Today there are already dealers who are officially importing only electric vehicles. The manufacturing of these cars contains more innovation and technology than machinery. We hope that Armenia will also be able to become a country with the capacity of assembling, and at a certain stage also manufacturing electric vehicles. We also plan to have a greater number of EV charging stations not only in Yerevan but in other cities, in order for motorists driving electric vehicles not to have problems”, Grigoryan said.

Asked about another environmental project on limiting the use of plastic bags, Grigoryan said the draft legislation that was approved by the Cabinet was debated for a very long time. “There were procedural obstacles, but it got finally adopted. It will soon be debated in parliament, and if passed the sale of up to 50 micron single-use plastic bags will be banned from January 1, 2020.  This is the de jure dividing range, we expect that by 2022 the use of plastic bags will significantly drop as a result of the public’s change of behavior,” he said, noting that the ban features certain exceptions, such as recycled trash bags, bags used for food packing and weighing. The alternative will be paper and other reusable fabric bags, the minister said.

“There are 44 plastic producing companies in Armenia, and 27 of them are manufacturing only polyethylene bags. The law allows them on one hand to sell their stock within two years, and on the other hand to change their profile and start making biodegradable plastic. The producers will gain great market advantage and can further expand and export their products to EEU countries,” Grigoryan said when asked about the businesses in the area and what effect the law will have on them.

Minister Grigoryan also highlighted other programs currently under implementation. He pointed out the groundwater saving project in the Ararat Plain that began in 2019.  He said they were able to save nearly 100 million cubic meters of groundwater as a result of conservation and dissolving of abandoned wells, as well as reduction of volumes of active wells in the Ararat Plain in 2019. “This saving is greater than the water used in Yerevan in an entire year”, he said.

“We seek to maximally reduce the non-efficient use of water. Last year important work was done also in terms of inventorizing abandoned tailings and waste. Under my orders a list of 10 territories subject to primary recultivation was created. At this moment we have applied to the Cabinet and in the event of relevant funding we will begin the physical recultivation work. There are a number of implemented works in the forestry area also, but these works are continuous”.

In terms of international cooperation, Grigoryan said there are numerous examples. He pointed out the recently opened Environmental Monitoring and Information Center, a laboratory opened as a result of cooperation between the Armenian Government and the European Union.

He said they plan to acquire two mobile labs for air and water quality control.  “In 2020 the EU has provided 5 million Euros in funding and we plan to implement certain actions for the restoration of Lake Sevan”, he said.

“Multiple projects are underway under the climate programs, and there are two major initiatives: As part of a 1,5 million dollar grant by the Adaptation Fund it is the recultivation program of the abandoned quarries in Artik, as a result of which a park will be created and the dust emissions will significantly decrease. 2,5 million dollar has been allocated for the second project, as a result of which a number of social-economic programs will be implemented in the nearby communities of Khosrov Forest Reserve and the Dilijan National Park,” Grigoryan said.

Other programs include the construction of an agricultural market in Meghri by KfW grants, the installation of solar power stations in two villages, again in Meghri region.

The Minister of Environment also highlighted the fight against illegal fishing in Lake Sevan.

The full interview is available in the Armenian version.