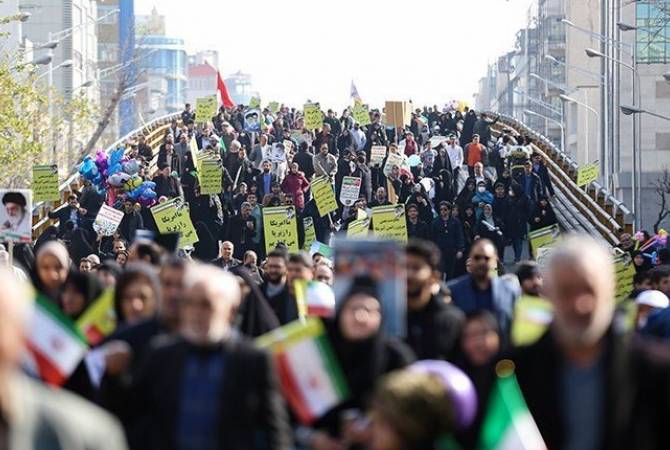 
YEREVAN, FEBRUARY 12, ARMENPRESS. On February 11, Iran celebrated the 45th anniversary of the Islamic Revolution. Mass celebrations took place in Tehran and elsewhere in the country.

Usually, Iranians are heard chanting “Death to America” during the marches, however one of the participants of the rally chanted “Death to Armenia”.

Obviously the Iranian Turk intended to incite some kind of provocation, however he didn’t dare to demonstrate himself for long, because if Iranians were to hear those words they would most likely show the fascist “where he belongs”, writes Infoteka24.

It is a well-known fact that Armenians enjoy a special, warm and respectful attitude in Iran, not only by the people but also the government of the Islamic Republic.

Armenia has always supported its neighbor Iran in international arenas in difficult situations, and Iran reciprocated with gratitude and assistance, which can’t be said about the Turkic states of the region – Azerbaijan and Turkey.

The Azerbaijani separatists – bearers of pan-Turkic ideology, are creating no few problems for Iran – inflaming atmosphere of hostility and hate towards the Iranian people and authorities and threatening the country’s security.

“We are sure that such a manifestation of Armenophobia in the Iranian capital should not remain unpunished and the country’s law enforcement agencies will seriously deal with the Azerbaijani provocateur,” the source writes.