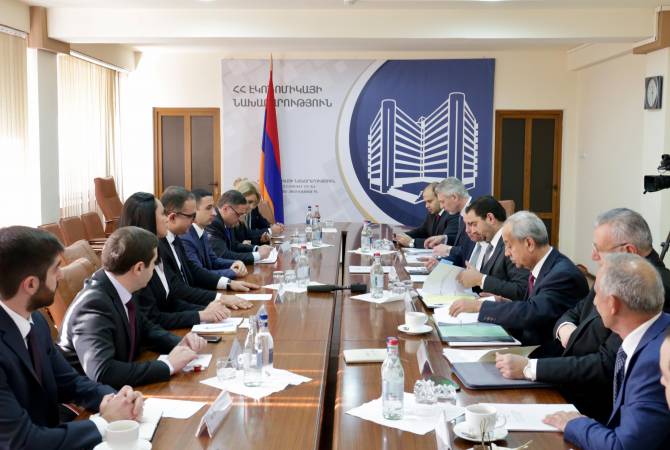 The delegation arrived in Armenia for the preparation of the upcoming visit of King Abdullah II of Jordan to Armenia, as well as for discussing the bilateral cooperation agenda.

“Welcome to Armenia”, the Armenian minister said in his opening remarks. “We are happy to host you in Armenia to discuss the agenda of economic relations. Our countries have a huge economic potential which is not utilized, and the opportunities of its utilization are in our today’s dialogue agenda”.

Minister Khachatryan introduced the recent changes in Armenia’s economy and stated that all participants of the economic life in Armenia have equal opportunities.

“On behalf of myself and my delegation I want to thank you for such hospitality in our friendly country. This derives from the high-level political relations between our countries. Nevertheless, in such relations the mutual economic partnership is very modest”.

The Armenian minister proposed the Jordanian delegation to discuss the cooperation in the tourism sector as a dynamically developing direction in the two countries. They also discussed increasing the trade turnover volumes between the two countries based on bilateral interests. He informed that the Investment Support Center operating in the ministry will assist the delegation on holding discussions and establishing contacts with the private sector in Armenia.

The Jordanian minister touched upon Armenia’s IT development potential, stating that in this sense the economies of the two countries have commonalities, and thus cooperation opportunities.