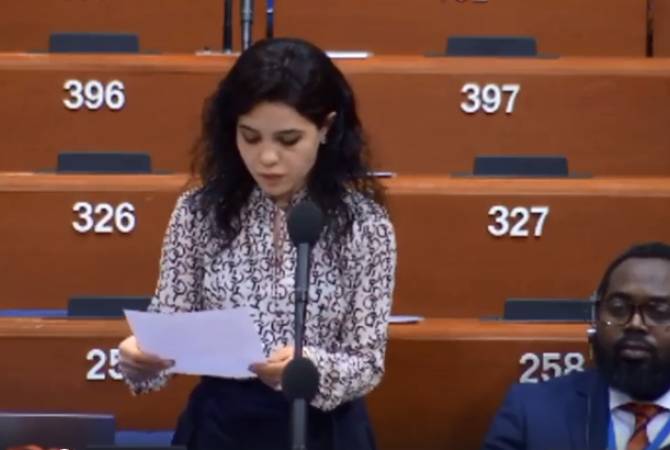 
YEREVAN, JANUARY 29, ARMENPRESS. In nowadays in many countries even in Council of Europe space journalists who dare to speak the truth have to face life threats, get arrested, harassed, member of the Armenian delegation to PACE, My Step faction MP of the Armenian parliament Tatev Hayrapetyan said in her speech at PACE.

“Journalism can never be silent: that is its greatest virtue and its greatest fault. It must speak and speak immediately, while the echoes of wonder, the claims of triumph and the signs of horror are still in the air. These words belong to Henry Anatole Grunwald who was an Austrian-born American journalist and diplomat. Yes, journalism is about speaking up the truth, however unfortunately in nowadays in many countries even in Council of Europe space journalists who dare to speak the truth have to face life threats, get arrested, harassed. The horrible case of Daphne Galizia is a vivid example and this report perfectly reflects that reality”, the MP said.

She said the Freedom House, which releases an annual report ranking countries based on “Freedom on the Net”, has ranked Armenia in eighth place. The 2019 report says that “In Armenia, positive changes unleashed by the 2018 Velvet Revolution continued, with reformist prime minister Nikol Pashinyan presiding over a reduction in restrictions on content and violations of users’ rights. In particular, violence against online journalists declined, and the digital news media enjoyed greater freedom from economic and political pressures”.

“I think the example of Armenia’s PM Nikol Pashinyan when from the outspoken criticizing journalist and opposition politician he became the leader of revolution and the head of the country obviously shows how important and reality changing journalism can be. However, we face serious problems with journalism in our neighboring countries, particularly in Azerbaijan and Turkey where situation with media is a topic of serious concern, which is also mentioned in the following report. In Azerbaijan the cases of Khadija Ismayilova, Afgan Mukhtarli, Mehman Huseynov obviously show how ruling family reacts to criticizing journalism and how dangerous it is to bring up questions and conduct investigations showing the corrupted reality of Azerbaijan”, MP Hayrapetyan said, adding: “Of course we can’t be silent and indifferent towards these cases. From one side we deal with human rights issue, from other side with freedom of speech. I hope as PACE members we should be the most possible to be the guarantors of media freedom, we should be watchdogs towards member countries and make respective measures to prevent the persecutions against the journalists. So either we speak up today and do our best to put a stop to this trend or we will have to face the repetitions of such terrible cases in future. We have already chosen the first path and we need to be committed to this”.