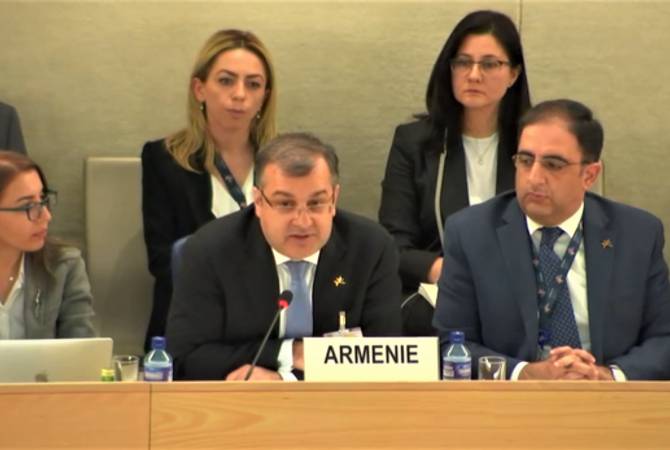 
YEREVAN, JANUARY 28, ARMENPRESS. On January 23 a discussion of the national report of Armenia in the third cycle of the Universal Periodic Review was held at the UN Human Rights Council in Geneva.

Deputy Foreign Minister of Armenia Artak Apitonyan led the Armenian delegation at the discussion of the national report.

Armenpress presents the key points of the deputy FM’s statement at the discussion:

“As a newly elected member of the Human Rights Council, Armenia reaffirms its unwavering commitment to enhance protection and promotion of human rights according to its voluntary pledges, in particular by building peaceful and inclusive societies, addressing the issues of prevention of genocide and mass atrocities, countering hate crimes targeting ethnic and religious groups, protecting the rights of women and refugees”.

“In spring 2018, a popular peaceful non-violent Velvet revolution took place in Armenia. It was a bold manifestation of exercise of fundamental rights and freedoms, and marked a major step in Armenian history towards building a more democratic society. The Revolution gave a new impetus to legal, judicial, economic and social reforms in the country and to radical transformations in the fields of good governance, rule of law and human rights.

Armenia is implementing a wide range of reforms to ensure full and unimpeded realization of civil and political rights.

One of the pillars of the package is the judicial reform aimed at ensuring independence of judiciary and restoring public trust towards the system. Its key elements are the introduction of balanced mechanism for evaluation of the integrity of judges as well as the establishment of functional, structural, material and social guarantees of their independence”.

“Unwavering fight and campaign against corruption is another important priority of the Government. The Anti-corruption Strategy introduces institutional framework focused upon prevention, examination and education. It includes issues related to the establishment of the anti-corruption institutional body, anti-corruption court, penalization of illegal assets, verification of property status of public persons and enlargement of the asset and property declaration system. Recently, number of corruption-related criminal cases, including against high-ranking officials, were instituted and examined”.

“The Velvet Revolution contributed to the strengthening of freedom of media and freedom of expression in Armenia. The success of political transformation was not only based on strong will and unity of population, but also due to the wide use of online communications. This change brought Armenia to a new level of democracy. In the 2019 Index of the Reporters Without Borders, Armenia was ranked the 61st making a remarkable improvement of 19 notches in comparison to the previous year. Armenia is among the countries who last year have recorded the biggest progress on internet freedom and is ranked in the top 10 free countries along with Australia, United Kingdom, United States, France, Italy.

The unhindered exercise of the right to freedom of assembly is also of crucial significance for the Government, which took major steps in bringing law-enforcement agencies to the best international standards. The historical low number of complaints during last year is indicative of the tendency”.

“Armenia highly values the involvement of women in building peace and security. Last February, Armenia adopted the first National Action Plan on implementation of the provisions of the UN Security Council Resolution 1325. Armenia attaches special importance to ensuring active participation of women in all stages of conflict cycle and protection of women affected by conflict and their human rights. I would like to recall in this regard that the “Women for Peace” campaign has been inaugurated in Armenia with an aim to provide an inclusive platform for women and mothers to promote peace and reconciliation in the conflict torn areas in our region and beyond.

The active role played by women in the Velvet revolution still remains to be translated into more tangible results in representation of women in the political and economic life of the country, which was also rightfully noted by various partners. Some successes are recorded in the trendy spheres of economy. Par example, the information technologies sector of Armenia, one of the GDP growth key sources, has registered 32% of women participation against 20% of international average. However, the level of women representation in the parliament and senior-executive positions – about quarter of the mandates – remains low. And although additional efforts are needed with a view of achieving gender parity in all social realms, we are, however, convinced that its is doable with existing strong political will of the Armenian authorities”.

“The principle of non-discrimination is the key element within the Government human rights policy. Promotion, protection and realization of the rights of the most vulnerable groups of population not to be discriminated against is a fundamental aspect of Government human right programming and is closely related to the other two core principles - participation and accountability. It is often the lack of participation of the rights holders and the lack of accountability of key duty-bearers that perpetuates and reinforces discrimination”.

“As a country which has been receiving refugees since late 1980s, protection of rights of refugees has always been of utmost importance, and the Government strived to create decent life conditions for refugees and to ensure their full integration”.

“Alarming tendencies in different parts of the world, including increase of number of international and interstate conflicts, unprecedented in recent years level of bellicose public discourse and hate speech, open glorification of mass-murderers and justification of international crimes, including the crimes against humanity, destruction of historical and cultural heritage, these are challenges for the human rights protection systems on national and global levels. In a more disturbing note, some of these actions are instigated or promoted by authorities of some states”.