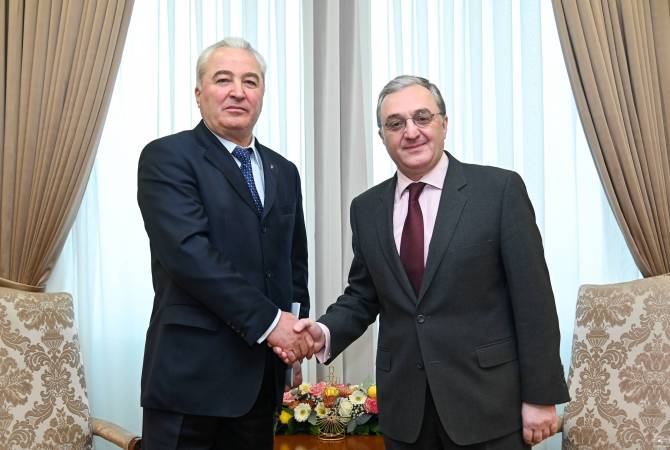 
YEREVAN, JANUARY 24, ARMENPRESS. Foreign minister Zohrab Mnatsakanyan on January 24 received newly-appointed Ambassador of Ukraine to Armenia Ivan Kuleba who presented the copy of his credentials to the FM, the ministry told Armenpress.

The Armenian FM congratulated the Ambassador on assuming office and expressed hope that his activity will contribute to further deepening and developing the Armenian-Ukrainian relations which have firm historic ties.

The officials highly valued the role of the Armenian community in Ukraine’s public-political life in terms of strengthening the friendly ties between the two states.

Both sides highlighted taking actions to strengthen the Armenian-Ukrainian political dialogue, including to hold regular consultations between the foreign ministries and boost the dialogue at all levels. In this context they attached importance to the next session of the Armenian-Ukrainian joint inter-governmental commission on economic affairs.

The Armenian FM and the Ukrainian Ambassador also exchanged views on a number of urgent international and regional issues.