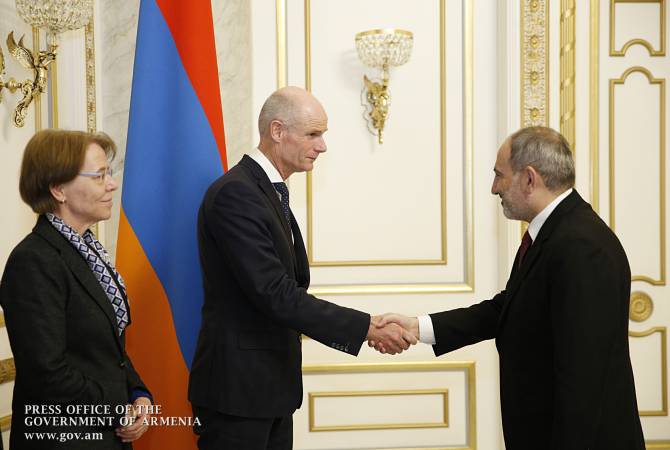 
YEREVAN, JANUARY 23, ARMENPRESS. Prime Minister of Armenia Nikol Pashinyan received on January 23 the delegations led by Foreign Minister of the Netherlands Stef Blok, who is in Armenia on an official visit.

As ARMENPRESS was informed from the Office of the Prime Minister of Armenia, Nikol Pashinyan welcomed the visit of Stef Blok to Armenia and expressed confidence that it will give a new impetus to the development and expansion of the relations between the two countries. Highlighting the organization of high-level visits, the PM added that this year he also plans an official visit to the Netherlands, which will be the 1st visit of the leader of Armenia to that country since the establishment of diplomatic relations between the two countries. According to Nikol Pashinyan, the Government of Armenia highlights bilateral cooperation in politics, economy, as well as the humanitarian sphere.

PM Pashinyan talked about the development of democracy in Armenia, struggle against corruption and reforms in the judicial and other spheres and emphasized that the Government of Armenia has set an ambitious agenda in the mentioned directions and makes consistent steps to bring it to life.

Nikol Pashinyan saluted the ratification of the Comprehensive and Enhanced Partnership Agreement between Armenia and the EU by the parliament of the Netherlands.

Thanking for the warm reception, Stef Blok noted that the democratic developments and reforms in Armenia are obvious and emphasized that the Government of his country is ready to cooperate with Armenia for bringing them to life. The Foreign Minister of the Netherlands noted that there are opportunities for economic cooperation, particularly in the spheres of agriculture and IT. Stef Blok expressed confidence that Pashinyan’s visit to the Netherlands will promote the bilateral agenda between the two countries.