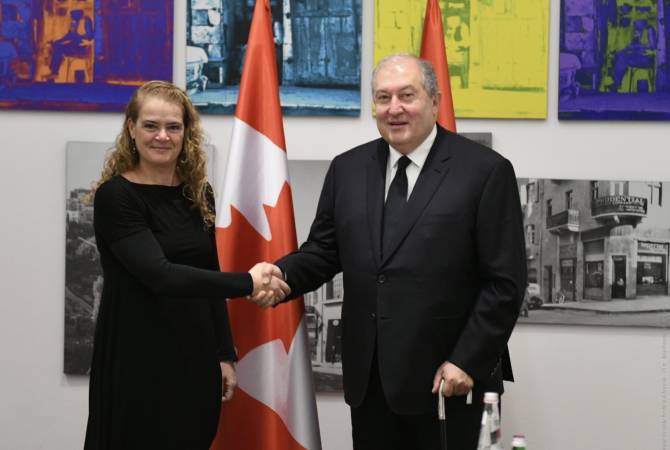 
YEREVAN, JANUARY 23, ARMENPRESS. President of Armenia Armen Sarkissian, who is in Israel on a working visit, met with Governor General of Canada Julie Payette, the Presidential Office told Armenpress.

President Sarkissian said the friendship between Armenia and Canada has a good history and the relations of the two countries have much greater potential in the future. Mr. Sarkissian said they are expecting a progress in the opening of the Canadian Embassy in Armenia thanks to which the bilateral ties will be raised to a new level.

The officials highlighted the great role and contribution of the Armenian community to Canada’s success history, calling it as a reliable bridge connecting the two friendly countries. In this context the President highly valued the warm and human attitude towards Armenians who moved to Canada from Syria.

The sides agreed that Armenia and Canada can successfully cooperate in the fields of education, science and latest technologies. Introducing the Armenian presidential initiative ATOM (Advanced Tomorrow) on science and technology development in Armenia President Sarkissian said this project aims at bringing leading international technological companies to Armenia to engage them in development of artificial intelligence, math modeling and other areas. He added that Armenia will be happy to see also the Canadian companies in this platform.

President Armen Sarkissian invited the Governor General of Canada to Armenia to attend the 6th STARMUS international festival as a specialist-scientist in the field of astronomy.