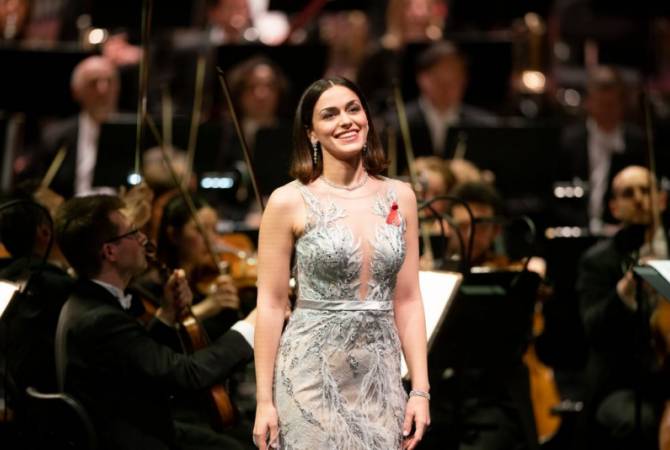 
YEREVAN, JANUARY 20, ARMENPRESS. Opera singer Ruzan Mantashyan has issued a new statement about the cancelation of her participation in Semper Opera Ball in Dresden on February 7 because of the refusal of Azerbaijani opera singer Yusif Eyvazov to sing with an Armenian singer.

In the statement René Massis, the representative of Ruzan Mantashyan urged chairman and artistic director of Dresden Opera Ball Hans-Joachim Frey to apologize from Ruzan Mantashyan.

“Dear Mister Frey,
You persist in expressing yourself through your press organs by inflexibly staying on your positions.
We must therefore adopt the same means of communication to respond to you.

In your article, you seem voluntarily to mix up different issues to muddy the waters.
You are also trying, in an intentionally sinuous way, to explain the working methods of artistic companies.
In the content of your article, there are two things to distinguish:

On the one hand, there are the human and cultural values of SemperOpernball.
You highlight the presence of artists from all horizons - including Armenians - in your past events.
We have never disputed this reality, we even explicitly welcomed it in our press release of January 14. You see that, in this area, we recognize your respectability and that of SemperOpernball.

On the other hand, there is the controversy born from the refusal of Mr. Eyvazov to perform with Miss Mantashyan for "political reasons," event which led to the cancellation of the engagement of our artist.

One could think that you were forced to do so before the intransigence of your Guest Star. This is not what would have been desirable, but the facts are there: Ruzan Mantashyan has been withdrawn from the project.
The best attitude would have been, to say the least, to apologize to Miss Mantashyan.
In this case, we could have tried to overcome this lamentable situation.
You haven't even considered it necessary to establish a personal contact.
Instead, in your press release of January 15, you dismiss, in an arrogant and insulting tone, the concrete arguments we produce to back up the facts of our version.
By doing so, do you really want us to take another step and take this litigation to a further level ?”, reads the statement of René Massis, posted on Ruzan Mantashyan’s Facebook page.


There were media reports on January 13 that Azerbaijani opera singer Yusif Eyvazov had refused to sing with Armenian soprano Ruzan Mantashyan for “political reasons”. The two singers were scheduled to sing together on February 7 at Semper Opera Ball in Dresden.

Later the Azerbaijani singer denied the accusations, publishing the statement of Semper Opera Ball, according to which the Opera Ball had no contract with the Armenian singer.

But back in December a statement had been issued, where Ruzan Mantashyan was mentioned as one of the singers. The final contract was not signed yet only for the reason that thgey negotiations were not over yet, but the agreement on the participation of the Armenian singer had been already reached.