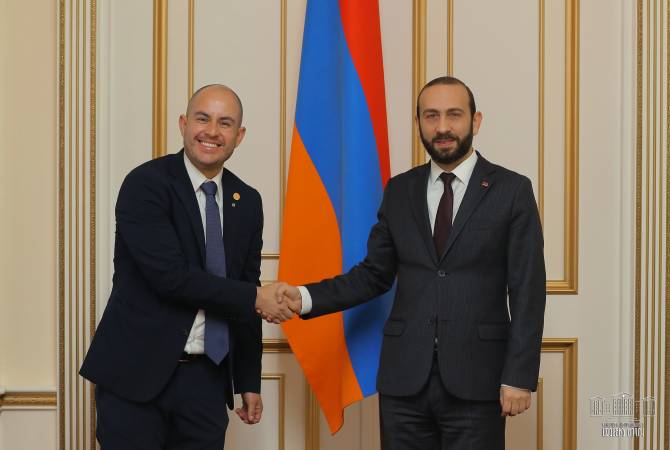 
YEREVAN, JANUARY 20, ARMENPRESS. Speaker of Parliament of Armenia Ararat Mirzoyan on January 20 received head of the parliamentary friendship group of Chamber of Deputies of the Congress of Mexico with Armenia Adolfo Torres Ramirez, the Armenian Parliament told Armenpress.

Welcoming the guest in Armenia the Speaker of Parliament expressed confidence that his visit and meetings here will contribute to further developing the relations between the two countries. The Speaker said the geographical distance between Armenia and Mexico cannot hinder to further intensify the relations. Ararat Mirzoyan expressed hope that the joint works of the parliamentary friendship groups will help to make the contacts between the Armenian and Mexican parliaments more effective both at the bilateral and inter-parliamentary platforms.

The officials also talked about the recognition of the Armenian Genocide and the Nagorno Karabakh conflict. The Armenian Speaker of Parliament expressed hope that the Parliament of Mexico will join the list of those parliaments that have recognized the Armenian Genocide based on the principle of historical justice. He also stated that Armenia is expecting from its international partners a balanced position on the NK conflict.

Adolfo Torres Ramirez thanked for the reception and informed that actions are being taken for the recognition of the Armenian Genocide, as well as promised to make efforts to make visible the current situation in the Republic of Artsakh. He said the resolution of the issue is peace. He invited Speaker Mirzoyan to Mexico. “I think that the visit of the President of the Mexican Chamber of Deputies to Armenia and your mutual visit to Mexico will record a historically new stage for the development of relations”, Adolfo Torres Ramirez said.

In response Speaker Mirzoyan said he will host his Mexican counterpart in Armenia with pleasure and will also visit Mexico. He expressed readiness to assist in joint initiatives.