Retrospective: pogroms of Armenians in Baku in 1918 on the pages of world press | ARMENPRESS Armenian News Agency

Retrospective: pogroms of Armenians in Baku in 1918 on the pages of world press 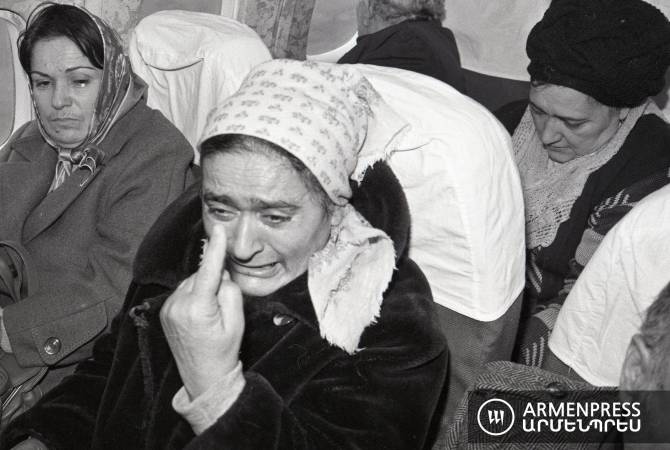 
YEREVAN, JANUARY 20, ARMENPRESS. In 1918, the second major wave of pogroms of the Armenian population was planned and carried out in Baku by local Tatars and Turkish-Azerbaijani troops, as a result of which more than 23,000 Armenians were massacred which was about 25% of the Armenian community. Baku pogroms were covered by the International Press of that time. According to the prestigious American newspapers of the time, there were about 30 thousand Armenian victims.

In particular, there’s a pack of American papers and magazines of the Armenian pogroms of 1918-1920 at the Archives of the U.S. Congress with broad reports on the massacres. The pogroms were highlighted by American “The Seattle Star”, “El Paso Herald”, “Alexandria”, British “The Sun” and many other international renowned papers. The second major wave of Armenian pogroms in Baku started from September 15, 1918, after the invasion of Turkish troops, and lasted till November.

An article on El Paso Herlald’s October 25, 1918 edition says there was a report from Tehran to the United States Department of State on October 22, stating that “when the British evacuated Baku some time ago, it was almost 36 hours before the Turks arrived. In the meantime, the Tartars had looted and murdered indiscriminately and it was reported that thousands of Armenians were massacred”. 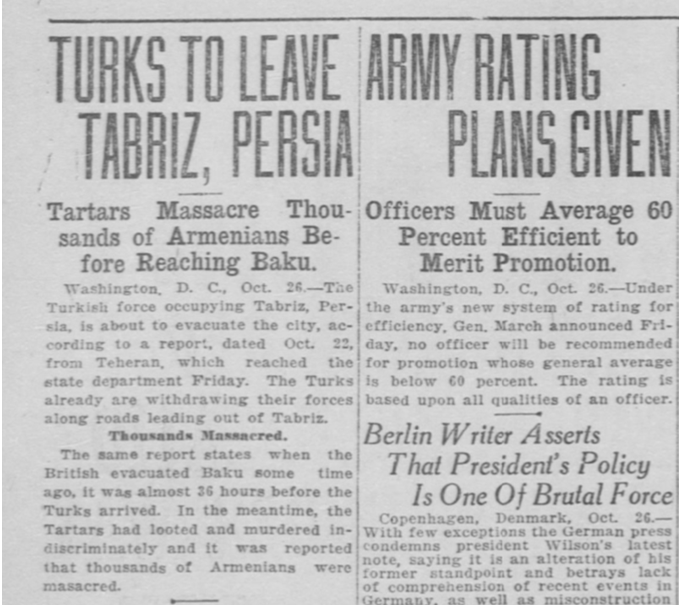 “30 thousand killed in fighting at Baku; Armenians suffer Horribly” is how El Paso Herald described the pogroms of 1918 on its December 7th edition. The paper refers to reports received by German paper “Vorwärts”. The latter states that “Turkish forces massacred 10 thousand Armenians while evacuating the towns of Baku, Olti and Ardahan, in the Caucasus” and “in some towns the entire Armenian population was exterminated. The Turks permitted Tartar troops to plunder the Armenians”.

The next day this report was published by British The Sun, American The Maui News (Hawaii, U.S.) and by Alexandria newspaper (Virginia, U.S). The latter states with “Turks massacre 10 000”, “More Turkish atrocities reported”, “Fleeing Turks slay 10 000”. 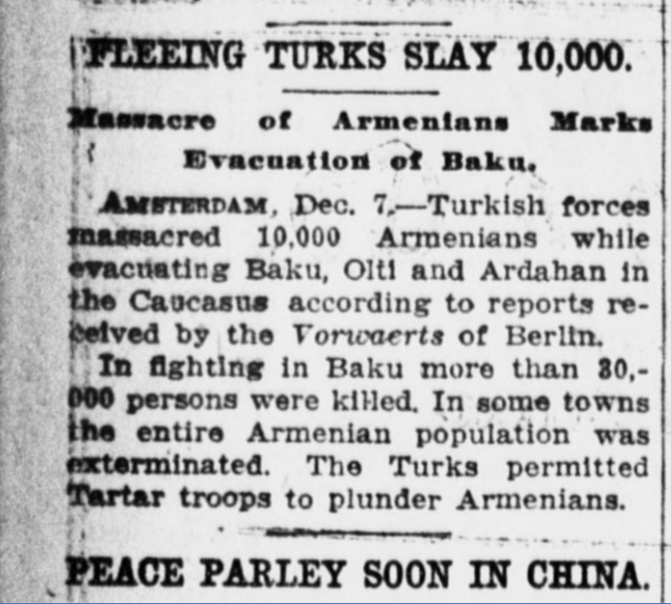 Associated Press agency’s report on the massacres of the peaceful Armenians was published in Indian state’s The Richmond Palladium And Aun-Telegram newspaper on January 28, 1919.

"Intense anxiety is felt by Armenians here over reports that large bodies of Turkish troops have joined Tartar bands and are attacking Armenian villages. It is feared that still another chapter of atrocity will be added to the Turkish record before the allies are able to relieve the beleaguered Armenian towns... “Unofficial reports to the Armenian bureau here indicate that about 20 000 people, including a considerable number of Armenian bodies, were slaughtered in Baku and in the surrounding regions”.

Associated Press also shares details about the defense organized in Baku. Referring to the reports received by the secretary of the Armenian Bureau, Armenians had been holding Baku for 8 months before the British force arrived and when they were ordered to evacuate the city, a British relief force commanded by General Dunsterville arrived. It is important to note that the latter advised Armenians to surrender when “the situation became hopeless”. Raffi then states that the advice was not followed,”apparently, for the town was taken by assault, September 16, two days after the British left, indicating that a part, at least, of the Armenians held out until overwhelmed by the combined forces of Turks, Tartars and Germans. Some of the people remaining in the town had fled and part of the military force succeeded in retiring in good order to the persian port of Enzeli”. The article was completed with the following statement. “All remainders were massacred”.

The Richmond palladium and sun-telegram. [volume], January 28, 1919 The tragic state of the Baku Armenians is also stated by Carson City Daily Appeal daily newspaper (Nevada. U.S.) on its June 26th edition of 1919. Referring to United Press, another noteworthy newspaper of that time, the headline of which states “Armenians starving - says Red Cross man”. Giving more details, the article also states that 30 thousand Armenians were massacred at Baku, on the Caspian Sea, last December by the Turks”. The evidence is provided by Lieutenant Melville Chater, who also mentions that some were able to escape before the massacres, becoming refugees. This article was also published on The Seattle Star(Seattle, Washington state) and The Dairly Morning Oasis (Arizona). 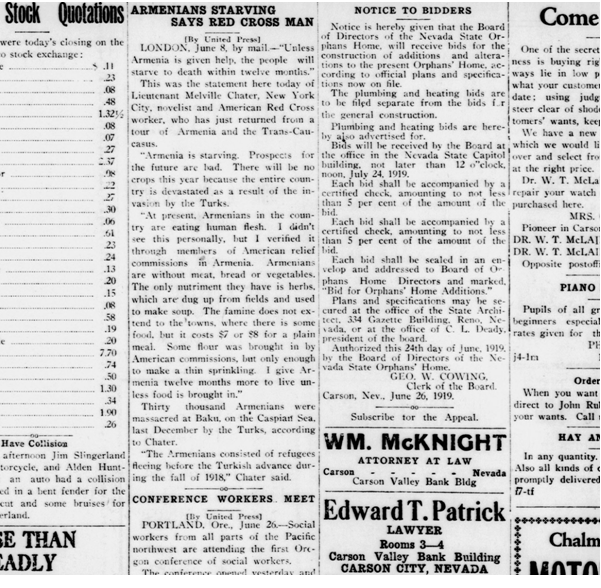 These publications on the International press once again highlight the fact that in the period of 1918 September-November, peaceful Armenian population became the victims of planned and organized pogroms and currently are the undeniable proofs of the anti-Armenian state policy of the modern-day Azerbaijan Republic.

Azerbaijan’s genocidal policy remained unpunished paving the way for more anti-Armenian campaigns and pogroms against Armenians as the world witnessed in Sumgait, Kirovabad (Gandzak, nowadays Gyanja), Baku and other settlements of the Azerbaijan SSR. Hundreds of Armenians lost their lives and thousands were deprived from their houses and properties, becoming refugees. They were forced to leave the territories that belonged to them and their ancestors. Besides Armenians, Russians and Georgians have also been the target of the rascist and xenophobic policy of Azerbaijan. The latter should still be considered as regional threat since the indigenous people and minorities living in Azerbaijan are currently under the threat of the same policy. The policy of racism and chauvinism, which is promoted in Azerbaijan at the state level, is a danger not only for Artsakh and Armenia, but also for the entire region and civilized society as a whole.