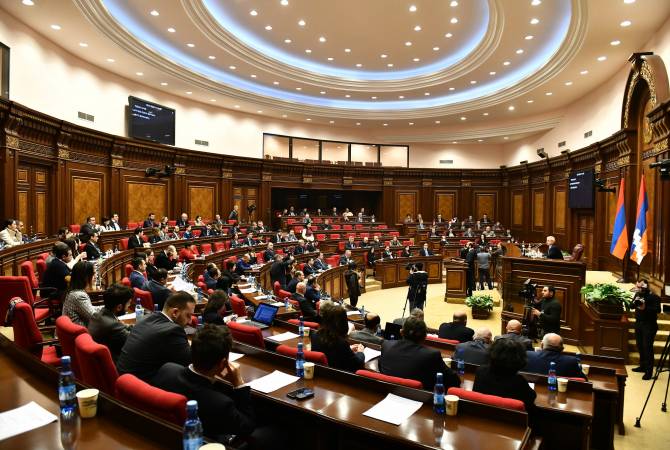 
YEREVAN, JANUARY 18, ARMENPRESS.  The MPs of the Republic of Armenia and Artsakh issued a joint statement, condemning the massacres of Armenians in Azerbaijan’s capital Baku 30 years ago. ARMENPRESS reports the statement was unanimously adopted on January 18 at the end of the special sitting of the Inter-Parliamentary Committee on Cooperation between the Republic of Armenia and Artsakh in Yerevan.

“In the period of January 13-19 coordinated and mass murders of Armenian population took place in Baku with the awareness and permission of the authorities. Hundreds of Armenians fell victim to the ethnicity-based violence. The property of Armenians was looted and confiscated. Under the threat of imminent physical extermination over ¼ million of displaced Armenians found shelter in different countries in the status of refugees. The massacre of Armenians in Baku is the result of the large-scale racist discrimination against Armenians unleashed by the extremist forces of Caucasian Tatars and later the Azerbaijani leadership at the beginning of the 20th century, which continues up till now, leading to a drastic drop of Armenian population in the areas under the Azerbaijani control, while at the end of the 1980s it obtained a new pace completely annihilating the Armenian population in Baku and other cities of the Azerbaijani SSR.

Recording that against the facts recorded by the international community and human rights organizations, the Azerbaijani leadership u till now denies its genocidal activities, distort realities and avoid being brought to account.

The Committee notes in the statement that crimes against humanity have no statute of limitations, emphasizing that the condemnation of the past crimes is the one of the key measures to prevent new crimes. The Inter-Parliamentary Committee on Cooperation between the Republic of Armenia and Artsakh calls on parliaments, parliamentary assemblies, international organizations and human rights organizations to condemn the crimes against the Armenian population of Sumgait, Kirovabad (Ganja) and Baku by Azerbaijan, which pose danger not only to the Armenian people, but also to regional security, stability and development, as well as urges them to take practical measures for their prevention.