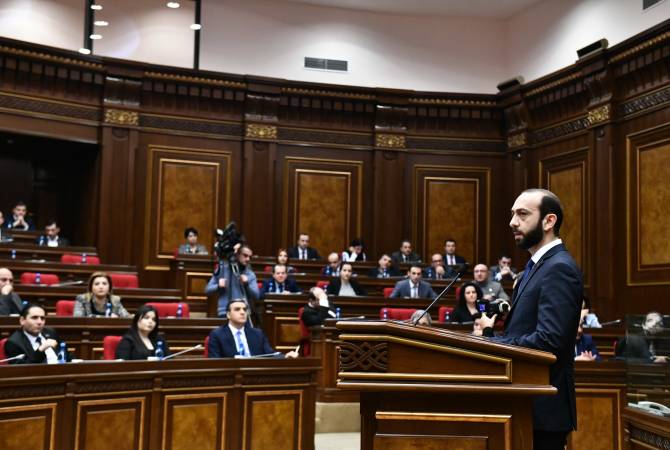 
YEREVAN, JANUARY 18, ARMENPRESS. Referring to the Baku massacres of Armenians 30 years ago, President of the National Assembly of Armenia Ararat Mirzoyan noted that Azerbaijan demonstrates Armenophobia also in the 21st century, ARMENPRESS reports Mirzoyan said on January 18 during the special sitting of the Inter-Parliamentary Committee on Cooperation between the Republic of Armenia and Artsakh in Yerevan.

“Right 30 years ago in the capital city of the Azerbaijani SSR happened something that, unfortunately, we are well familiar with – massacres of Armenians, which took place with the clear permission and support of the Azerbaijani authorities”, Ararat Mirzoyan said, noting that numerous people were tortured and killed, thousands became refugees just because they were Armenians.

“With irony of fate, those massacres were already the 3rd in the 20th century in the city that had been declared center of multiculturalism – Baku. The same happened in the same handwriting and the same city also in 1905 and 1918”, Ararat Mirzoyan said, adding that massacres of Armenians took place before and after Baku massacres in other Azerbaijani cities.

The President of the parliament noted that the policy of Armenophobia has also been demonstrated in the 21st century.

“The Azerbaijani authorities declared Ramil Safarov a hero, someone who killed an Armenian serviceman while he was asleep. In April 2016 civilians were brutally killed in Talish. The same policy is manifested everywhere in Azerbaijan – from school textbooks to the announcements of the president of that country where the entire Armenian nation is declared enemy of Azerbaijan and subject to total annihilation.

The Baku massacres were just a part of the long-lasting anti-Armenian policy of the Azerbaijani leadership”, Mirzoyan said, noting that still back in 1980s the Azerbaijani authorities had planned social, cultural and educational persecution against Armenians, as a result of which the number of the Armenian population in Baku had already significantly dropped.

The President of the National Assembly of Armenia also expressed gratitude to those Azerbaijanis, who against the state policy of their country, helped Armenians during those days to avoid death.