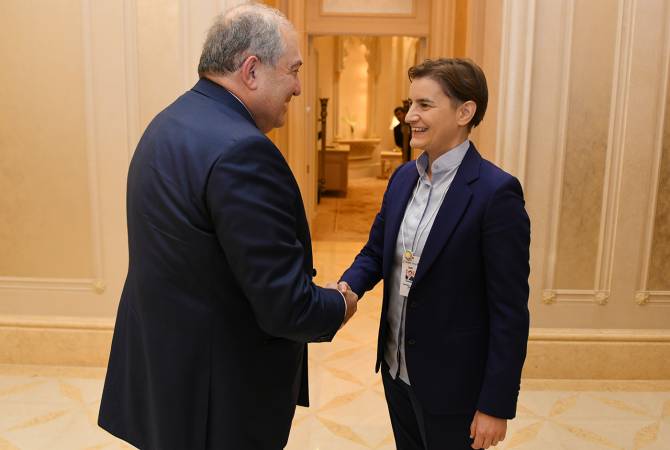 Highlighting the recent effective meetings and discussions the officials touched upon the implementation process of the agreements reached between the two sides. They praised the fact that the Armenian-Serbian relations are gradually growing. There is already a visa-free regime for the citizens of Armenia over which a respective agreement was reached during the Armenian President’s official visit to Serbia.

The Serbian PM informed that the Embassy of Serbia will open in Armenia in late February.

The sides also praised another agreement, about holding the Armenian Seaside Startup Summit forum along with the annual EXIT music festival being held in the Serbian city of Novi Sad.

The Armenian President and the Serbian PM discussed the prospective directions for the bilateral cooperation. They stated that both Armenia and Serbia attach a great importance to the environmental issues and green technologies, and in his turn President Sarkissian said the two countries can conduct a mutually beneficial cooperation in this sphere. The officials also highlighted the great cooperation potential in IT, high technologies and artificial intelligence. In this context they talked about the collaboration opportunities within the frames of the Armenian presidential initiative ATOM (Advanced Tomorrow).