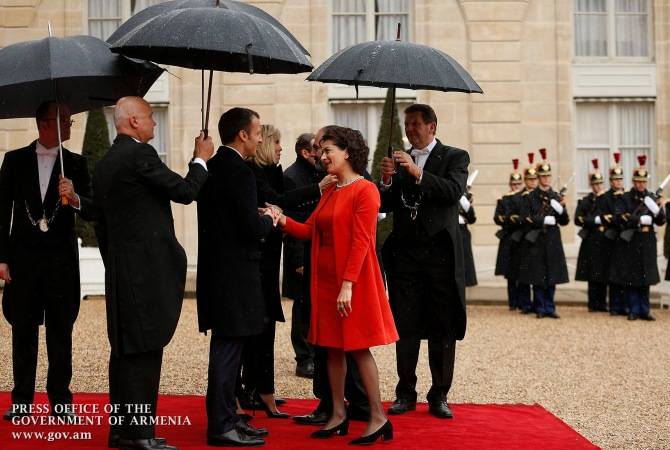 Pashinyan and his spouse Anna Hakobyan arrived to the Élysée Palace where they were greeted by French President Emmanuel Macron and his wife Brigitte Macron, the PM’s office said.

Afterwards the Armenian caretaker PM, together with world leaders, visited the Place Charles de Gaulle, where the commemoration ceremony took place at the Arc de Triomphe.

President of France Emmanuel Macron inspected the guard of honor at the beginning of the event.

After a tribute for the fallen and a moment of silence, the French national anthem was played, followed by a cultural program of the event. Students recited testimonies written by soldiers on Armistice Day.

The European Union’s Youth Orchestra performed French composer Maurice Ravel’s Bolero. The event was concluded by a symbolic ceremony at the Eternal Flame – students encircled the French president by placing their arms on each other’s shoulders – as a sign of collective revival.

Armenia’s caretaker PM Nikol Pashinyan is also expected to participate at the Paris Peace Forum within the framework of the 100th anniversary of World War I Armistice.